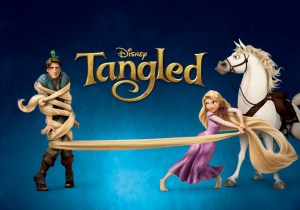 Tangled is definitely a classic Disney animated movie. And apparently the 50th such movie! It’s right up there in my book alongside Aladdin, Mulan and The Lion King (I haven’t seen The Princess and the Frog yet, but I hear that’s right up there too).

It takes the age old story of Rapunzel and gives it the typically cute and engaging Disney quirkiness. We all know Disney movies end happily ever after, but just how that happens certainly kept me guessing. The story was great, the animation was fantastic (being 3D animated, not cartoon) and the music up to Disney’s high standard.

I should note there was a different approach to the music this time around. Traditionally Disney animated movies take a slightly Bollywood approach to songs (i.e. you have some plot, then a mildly related song, then some more plot then another mildly related song). Tangled takes the more stage musical approach where some important scenes are played out musically in a style that would be more familiar to fans of Andrew Lloyd Weber than those of Disney. It still has a gorgeous song for a centerpiece of course, and though it’s not quite “A Whole New World”, it’s definitely one I’m gonna add to my library at my earliest convenience :)

My only regret is that I didn’t go to see it at 3D in the cinema. Apparently Disney played with the depth so that it aimed less for realism and more for awesome effect. Would have been cool to see.